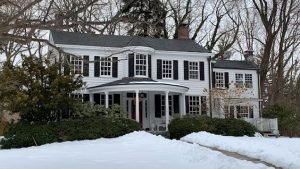 A recent news story in the New York Post discusses a real property dispute between Andre Leon Talley, a former Vogue editor, and his (former) friend, George Malkemus III, who also worked in the fashion industry.  Mr. Malkemus is a former shoe executive who expanded Manolo Blahnik in the United States.

The dispute concerns ownership of a mansion located in White Plains, the same City in which our firm’s offices are located.  This post will discuss some of the legal issues involved in the property dispute.

The dispute started when Mr. Malkemus filed a Notice of Petition in Greenburgh Town Court late last year to evict Mr. Talley from the premises.  The Petition was filed after the necessary predicate notices were given to Mr. Talley.  The Petition also demanded back rent from Mr. Talley in an amount over $500,000.00, which is an unusually large amount to be demanded in a residential eviction action.

Mr. Talley is defending the action by claiming that there was an agreement among the parties (a third individual was also involved) in which Mr. Talley was to purchase the property from Mr. Malkemus over a period of time.  He claimed that the parties had a “gentleman’s agreement” whereby Mr. Talley would provide the downpayment towards the purchase price of the home, which would titled in the name of Mr. Malkemus.  Mr. Talley would occupy and maintain the home, and make payments to Mr. Malkemus, which, over time, would pay off the balance of the purchase price, at which point title would be transferred to Mr. Talley.

It appears, however, that this agreement was never put in writing.  As a result, each party now has a significantly different view of the transaction.  Mr. Malkemus is now arguing that Mr. Talley was simply a tenant at the premises, and that his payments were not to be credited towards the purchase of the property, but were simply for rent.  As a result, he is now claiming that Mr. Talley is behind on his rent, and has brought a landlord-tenant action to evict him for non-payment, as well as claiming arrearages in excess of $500,000.00.

Mr. Talley has, in turn, filed suit in the Supreme Court of the State of New York, Westchester County, to impose a constructive trust on the property.  A prior blog post discussed the legal issues regarding a constructive trust.  In general, a constructive trust may be imposed when there is a “special relationship” of trust between parties, and a promise is made, upon which one of the parties relies, regarding the potential transfer of real estate.  The promise may or not be in writing.

In the case that we are discussing, Mr. Talley is arguing that he was a long-time friend of Mr. Malkemus, and that they had an oral agreement regarding the property, in which Mr. Talley would deliver the downpayment for the purchase, occupy and maintain the house, and make payments over time which were to be credited toward his eventual ownership.  He further claims that he has made all the necessary payments, and that the Court should order the transfer of ownership of the property to him.  If his claim prevails and he is deemed to be the owner, he would not be subject to the eviction action.

Whether Mr. Talley’s claim will be successful, only time (and the Courts) will tell.  Our firm has handled many cases that involve promises to transfer property, whether an entire property, or a portion of ownership, and are familiar with the complex legal issues involved.  We welcome all inquiries concerning this type of matter.