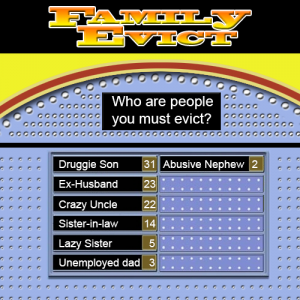 Our firm receives many inquiries regarding property disputes among family members.  Often, several relatives may inherit property from a deceased relative, and cannot agree on how the property is to be maintained, whether the property should be sold, and who should live at the property.

Prior blog posts have discussed the possibility of a partition action when the owners cannot agree on the disposition of the property.  An additional question often raised, in several different contexts, is whether a family member, living at the premises, can be legally evicted.  The answer to this question involves delving into the situation in further detail, and is far from simple.

The first question to be asked is whether the person sought to be evicted is an owner of the property, whether through inheritance or other type of transfer.  If that family member is a legal owner of the property, the general answer is that person cannot be legally evicted.  In general, any owner of a property, even a partial owner, has a right to reside at the premises.  Let’s assume two brothers inherit a house from their parents.  Both brothers now own 50% of the house, and both have a legal right to reside at the house without paying rent to the other.  However, they are both legally obligated to equally share the costs of the upkeep of the house, such as routine maintenance and real estate taxes.  Neither would have the legal right to bring an eviction action against the other.  The situation could be resolved by one of the brothers buying the other’s interest, or selling the property to a third party, and splitting the net proceeds.

The next situation would be when the family member is not an actual owner of the house.  In this situation, that person may or may not have a right to reside at the premises.  An example would be when an owner’s sibling lives at the premises.  Let’s say an elderly woman (the owner) lives in a house with her sister.  The sister is not an owner, but has lived at the house for many years.  The owner then passes away and leaves the house to her son, who wants to sell the house to a third party.  What becomes of the elderly aunt?

Most standard real estate contracts in New York require the premises sold to be free of tenants and other occupants at the time of sale.  In this hypothetical situation, a Court would most likely not allow the eviction of the aunt in a summary proceeding.  A summary proceeding is an expedited hearing held in the local landlord-tenant Court.  It is usually held on short notice to the tenant, as hearings are usually scheduled for 6 – 12 days after the Notice of Petition and Petition is served on the tenant.

New York Courts have held that where family members (non-owners) live at a property with the consent of the owner, they cannot be evicted in a summary proceeding.  Instead, an ejectment action must be brought in the Supreme Court of the county in which the premises are located.  An action in ejectment is brought in the same manner as a regular lawsuit, where the party is served with a Summons and Complaint, and then has between 20 and 30 days to file an Answer, depending on the method of service.  After answering, the defendant would have the opportunity to defend the action, obtain full discovery, and have a trial, if the action is not decided by Motion.  A Supreme Court action, unlike a summary proceeding, may take many months to be resolved.

One exception to the necessity of an ejectment action is if the family member has an actual lease for the premises in question.  If they have a written lease, they can be treated as an ordinary tenant, and can be evicted through a summary proceeding, depending on the actual facts of the case.

We recommend that all family members who encounter situations similar to those in this blog post consult knowledgeable and experienced counsel to assist them in the proper legal procedures.