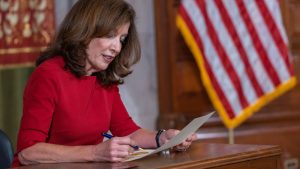 With the beginning of the COVID-19 pandemic, New York, along with many other states, adopted a law temporarily halting evictions.  In addition, there was an additional moratorium that prevented foreclosure cases from going forward in Court.

This blog post will focus on the eviction moratorium, its effects, and its expiration as of January 15, 2022.  The original moratorium went into effect in March of 2020.  The statute initially provided that if a landlord sought eviction against a tenant, the tenant could complete a form which stated that they were suffering from a COVID-19 related hardship which affected their health and ability to move, or from a financial hardship caused by COVID-19.  Once the form was completed and send to either the Court, the landlord, or the landlord’s attorney, the eviction proceeding would be stayed until the moratorium was lifted.

The main problem with this statute was that it provided a landlord no opportunity to rebut the tenant’s assertion that they were negatively impacted by the COVID-19 pandemic, and that such impact affected their ability to pay their rent, or to find new living arrangements.  A group of landlords challenged the constitutionality of that statute in a lawsuit.  Ultimately, the United States Supreme Court ruled that, in order for the statute to be constitutional, the landlords should have the right to challenge the tenant’s hardship declaration in Court.  Eventually, the moratorium statute was amended by the New York State legislature to allow landlords to request a hearing if they wanted to challenge a tenant’s hardship declaration in Court.  If the Court subsequently found that the tenant could not prove his allegations that he was suffering from a COVID-19 related hardship, then the Court could rule that the eviction moratorium did not apply to that particular case, and allow the eviction matter to proceed in its normal course.

Our firm did have at least one matter where, on behalf of a property owner, we challenged the hardship declaration, and, after a hearing, the Court ruled that the moratorium did not apply, because the occupant failed to provide any COVID-19 related hardship, either health-related or financial.

Since the original law was passed, the moratorium was extended several times by the New York State legislature and signed into law by the Governor.  With Governor Cuomo resigning and being replaced by his Deputy Governor, Katherine Hochul, it was an open question as to whether the moratorium would be extended after it was schedule to expire on January 15, 2022.

It appears at this writing that the moratorium did in fact expire, and is not going to be renewed.  The result is that eviction cases and actual evictions of tenants can now proceed in New York State.  Of course, there is going to be a large backlog of cases in New York to be heard.  In addition, there will be many new cases, as tenants who did not pay their rent during the pandemic, or whose leases have expired and were not renewed, are now subject to eviction.

Our firm has extensive experience in navigating the eviction process for both landlords and tenants.  If you require legal assistance for such matters, feel free to contact us.