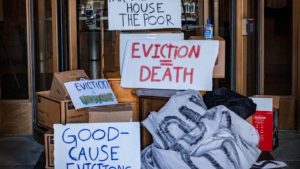 A recent article in the New York Post discusses a proposed bill relating to evictions which is being considered by the New York State legislature.  The “Good Cause” eviction bill would limit evictions in New York to only the narrowest of circumstances.

Since the expiration of the COVID-19 eviction moratorium in January, evictions have generally resumed in New York.  Under the moratorium, landlords were prevented from evicting tenants, unless they were an actual danger to people and property.  As COVID-19 waned, the Governor allowed the moratorium to expire.  As a result, landlord-tenant Courts have generally resumed normal operations, and tenants have been subject to evictions after proper Court proceedings have been held.

However, as a result of the temporary eviction moratorium, there have been some advocates who are attempting to further limit evictions, even though COVID-19 has waned and available vaccines have greatly reduced the risk factors for most individuals.  Under the proposed “Good Cause” eviction bill, landlords would not be allowed to evict tenants, except for non-payment of rent and lease violations.

What would this mean in practice?  The tenants most affected would be those whose leases have expired, or who never had a lease.  Currently, tenants whose leases have expired, with certain exceptions such as rent stabilized or rent controlled leases, are considered holdovers, and may be evicted after certain timely legal notices are given.  Under existing law, unless the property is subject to rent regulation, a landlord has no obligation to renew a lease, or provide a new lease, once the current lease expires.  The landlord does not have to give a reason for the non-renewal, and may simply bring a holdover proceeding in landlord-tenant Court to evict the tenant, even if they are current on their rent and have not violated any terms of their (expired) lease.

Under the proposed new law, it would appear that landlords would be unable to evict holdover tenants, or tenants without leases, assuming that the tenants are current on their rent and have not violated their leases.  Simply having an expired lease would not be considered “good cause” for eviction, and the landlord would be required to renew the tenants, even if they no longer wish to rent the property or wish to rent to different tenants.  In addition, any rent increases above three percent or 1.5 times the regional Consumer Price Index, whichever is higher, would be presumed to be “unreasonable,” and, therefore, a tenants’ refusal to pay such an increased rent would not be grounds for eviction.  This would also limit landlord’s ability to set rental rates for their property.

The practical effect of the proposed law would be to convert even more New York housing stock to a form of rent regulation.  Currently, rent control and rent stabilization are limited in scope, and do not apply to most residential housing in New York State.  The “Good Cause Eviction” law, by forcing landlords to renew tenants with expired leases or no leases, and limiting the amount of rent increases, subjects the landlord’s property to rent regulation similar to rent stabilization.  Currently, when one purchases rental property, the buyer is aware whether the property is subject to rent regulation, and can research the status of all tenants and their regulated rent.  The new law would subject many more properties, whose owners purchased them without rent regulation, to new regulations which greatly limit the landlord’s power to terminate a tenancy.

Whether the new law will pass, and, if it does, what legal challenges it may face, are currently unknown.  We will continue to follow future developments and provide updates on these issues.