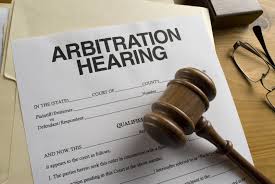 A recent series of articles in the New York Times discusses the growing prevalence of arbitration in resolving legal disputes. This blog has previously discussed arbitration proceedings in the context of New York Yankees slugger Alex Rodriguez (hereinafter “A-Rod”), discussing his attempt to reverse an arbitration ruling which upheld his long suspension. As baseball fans are aware, A-Rod was unsuccessful in having his suspension overturned, and ended up sitting out the entire 2014 season, and returned for the 2015 season, leading the Yankees in home runs.

A-Rod aside, the issue to be discussed is whether arbitration may be a better vehicle for dispute resolution than the traditional court system. In arbitration, parties agree to submit a dispute to a neutral, third party arbitrator, rather than to the court system. The first issue is the arbitrator to be utilized. Many contracts will state that the dispute should be submitted to a local branch of the American Arbitration Association (AAA). The AAA will generally supply a list of arbitrators with expertise in the area of the dispute, and the parties are allowed to rule out any arbitrators who may have a conflict of interest.

Other agreements may allow the dispute to be submitted to a religious tribunal, such as a Beth Din. This usually occurs when the disputing parties are members of the same religious group and prefer than their dispute be heard by members of their group, rather than in the Court system. Of course, if one of the disputants is not a member of the group, they may feel that they are at a disadvantage when the dispute is heard. Another aspect is that a religious arbitrator may apply religious doctrine and scripture, rather than civil law, in making their decision.

One factor parties must consider in deciding to arbitrate is the cost of arbitration. Arbitrators do not work for free. While the New York State Court system requires certain filing fees in commencing an action, the litigants are not required to pay the Judges on an hourly basis to hear their case. Independent arbitrators will charge on an hourly basis, with the parties to the dispute usually splitting the cost of the arbitration. Often, this cost will be greater than the cost of filing a civil litigation in the appropriate Court.

Another aspect of choosing arbitration is the time factor involved. If the parties agree to arbitrate, rather than litigating in the Court system, in certain actions, there will be delay in deciding the action. This is especially true in landlord-tenant matters. The New York Court system allows landlord-tenant matters to be brought in an expedited manner. For example, when a Notice of Petition and Petition for eviction is served by a landlord, the Court will order an appearance between six and twelve days after service of the petition. This allows the case to be heard and resolved relatively quickly.

If a lease contains a mandatory arbitration clause, the landlord is disadvantaged in that he cannot bring an action in Landlord-Tenant Court. Instead of a hearing being scheduled for six to twelve days after commencement, an arbitration hearing may take several months to be scheduled, depending on the availability of the arbitrator. The arbitrator may then take several weeks, or even months, to issue a decision. Even if the arbitration decision favors the landlord, the landlord still has to move to confirm the award in the appropriate Court. For this reason, we do not recommend arbitration for landlords in this context.

Weiss & Weiss has experience resolving all disputes through the arbitration process, and welcomes all inquiries relating to such contractual matters, including residential and commercial leases.