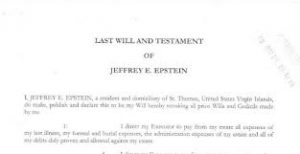 Most of the press concerning Jeffrey Epstein concerns the despicable crimes of which he is accused.  Of interest to this author  is the Will and other estate documents signed by Epstein merely two days before his death by suicide.  There are legitimate reasons why a person in prison or in the hospital may have an experienced attorney prepare documents such as a Will, power of attorney and health care proxy evidencing their last wishes with the anticipation of impending death.  If a person is in prison for a long time and even has children, his legal affairs need to be in order should he suffer death as a result of another inmate or from other causes.  However, Epstein seems to have fashioned a scheme to shield his assets and possibly defraud creditors of his estate, most notably his victims.

Apparently Epstein’s estate plan included a “pourover” Will that dictated that his assets would be left to a trust.  His executors then filed the Will in the U.S. Virgin Islands, rather than in New York State.  The possible explanations for this strategy will be discussed in this post.  We  may advise our estate clientele  to have such an estate structure, although not for such nefarious purposes.  As we have explained in prior posts, a trust can be a valuable tool in estate planning for certain persons.  In the event of a potential Will contest, trust provisions typically are more difficult to be challenged.  Further, in the case of famous people who may not want specifics of their assets and beneficiaries made public in a Surrogate’s Court filing , trusts afford the opportunity to keep such matters private because they are not filed with the Court.

Venue, the location of the probate Court filing, is an interesting issue in this case as well.  Typically, a Will should be filed in the state where the deceased maintained his primary residence.  However, Epstein had multiple residences around the world and seems to have selected the U.S. Virgin Islands as the location to probate his Will because he owned at least one island in the territory.  It is possible that the Court will decline venue and move the probate proceeding to New York, where Epstein seems to have spent the majority of his time.  In any case, ancillary probate proceedings will be required to determine the disposition of properties in each location.

Death so close in time to the execution of the Will makes for additional Court review of the Will.  Ordinarily a Will drafted by qualified attorneys  contains a “self-proving” affidavit of the witnesses and a representation that the execution was supervised by an attorney.  A self-proving affidavit contains statements of witness observations during the Will execution ceremony that mirror the Estate, Powers and Trusts Law statute as to the components making for a valid Will in New York.  Generally the Surrogate’s Court will readily admit a Will containing these components.  However, Epstein’s Will is likely to have additional review as to his mindset, capacity, not having been made subject to undue influence and the like.  The witnesses to the Will and the attorney-draftsman may be deposed by the Court.  In the event that the Will is deemed invalid, Epstein will be considered to have died intestate.  His brother as his only known heir would then serve as the estate administrator and would inherit any sums not already claimed by the government for taxes and as used to satisfy legal claims.  Should an executor or administrator renounce serving as estate fiduciary, an estate creditor could petition to serve as estate fiduciary or the public administrator may be appointed to act.

Epstein’s alleged victims would be considered to be creditors of the estate.  Some of them have already filed lawsuits against the estate seeking assets as compensation for their suffering.  As such, the estate’s executor will have the task of evaluating each claim in order to contest or settle same.  In New York, creditors claims need to be resolved before estate assets can be distributed to beneficiaries or the beneficiaries become personally liable for such claims.  It may have been Epstein’s goal to hinder creditors by having the probate filed outside of New York and by creating a private trust that prevents the disclosure of assets.  It is possible that the government will maintain that Epstein’s property was used for criminal purposes and seek forfeiture of same in order to compensate the victims.

Legal issues concerning the Epstein estate are likely to be raised for years to come.  We  will advise our readers of further developments as events warrant.