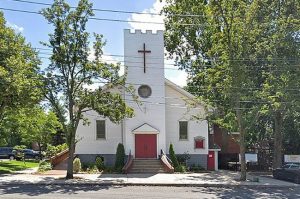 Recently in the news is an Appellate Court decision regarding a Lutheran Church located in Staten Island, New York City’s “forgotten” borough.  This case involved a lawsuit brought by the Eltingville Lutheran Church against its parent organization, the Metropolitan New York Synod of the Evangelical Lutheran Church of America (the “Synod”).  This case applies many of the legal principles discussed in prior blog posts regarding religious institutions and the application of both the New York Religious Corporations Law, as well as the Establishment Clause contained in the First Amendment of the United States Constitution.

The lawsuit arose when the Synod, which was the parent organization of the Church, issued a ruling that the Synod would permanently take over all management operations of the Church, including the ownership of all Church property and the real property on which the Church was located.  They also declared their intention to close the Church, and to seize its property and assets following its application of permanent Synod administration.

The Church objected to such a takeover, arguing that it was solvent, had Congregants who worshipped at the Church on a regular basis, and that there was no reason for the Synod to take over the Church, or to close its doors.

Under the rules of the Synod, the Church had the right to appeal this decision to the Synod Assembly.  Instead, it decided to file a lawsuit in State Supreme Court against the Synod.  However, the Supreme Court ruled that the dispute was not subject to judicial “second-guessing” from the Court.  The reason for this is that the First Amendment to the United States Constitution guarantees freedom of religion, and forbids state action interfering with such freedom.  As the Church voluntarily joined the Synod, it had agreed to abide by the Synod’s internal rules and regulations regarding Church management.  Although such rules provided for an internal appeal to the Synod Assembly, a Court is a state actor, and, as such, is forbidden from intervening in disputes over religious rulings.

As a result, the Supreme Court ruled that the Synod’s ruling would stand, and that the Church would be subject to that ruling.  The Appellate Division confirmed such decision.  The Church also attempted to “disaffiliate” itself from the Synod after the Synod’s ruling.  The Court ruled that such an attempt was “after the fact,” and was too late.  An organization cannot leave its governing body simply because it disagrees with one of its decisions.

This ruling is important for any religious institution that belongs to a larger governing body.  Although many Churches are independent, those which belong to larger organizations must abide by the rules of those parent organizations.  More significantly, the Courts in New York have demonstrated through their rulings that they will not intervene in a dispute over a parent body’s decisions or implementation of those decisions, due to the First Amendment forbidding government interference in religious matters.  Religious institutions, whether they be churches, temples, mosques, or otherwise, should be aware of this important legal principle, and consult experienced counsel when disputes occur.