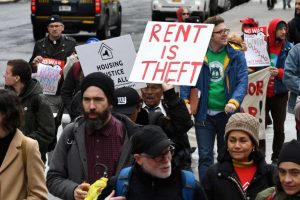 Recently in the news is that state representatives in Albany are considering sweeping changes to New York State’s regulations for rental units. Prior blog posts have discussed past revisions to the rent regulations.  While some of the changes only affect apartments in New York City, others may apply to apartments statewide.  As of this writing, Governor Cuomo has stated that he will sign any bill that the lawmakers pass.

As most New Yorkers are aware, rental prices in New York City are among the highest in the nation.  Whether having the government attempt to control the prices of rental units will result in lower rents overall remains to be seen.  Rent regulation by the government has existed in some form since the World War II years, and keeping rental prices low has not been achieved.  While some regulated tenants benefit, others, whose units are unregulated, may see larger increases. In addition, forcing landlords to charge regulated rents may discourage both the building of new units and investment by landlords in improving existing apartments.  Why spend money on repairs or renovations if rent rates remain fixed by regulation?  Obviously, our representatives do not think that this is a factor.

Of course, not all apartments are subject to rent stabilization.  In Westchester County, where our offices are located, each municipality has the option of adopting the Emergency Tenant Protection Act (ETPA).  A list of these villages, cities, and towns can be found here.  If the units are in a village, city or town which has not adopted the ETPA, then the units are not rent regulated.  In addition, the law only applies to buildings of six or more units.  Therefore, if one owns a three unit apartment building in Westchester, it would not be subject to rent regulations.

Another change being considered is the vacancy rent increase.  Currently, when a unit subject to the EPTA becomes vacant due to the tenant voluntarily vacating, the landlord was entitled to increase the regulated rent by as much as twenty percent.  The new rules would not allow such an increase.  In addition, under the current law, when a landlord makes substantial improvements to a building which benefit all of the tenants, such as installing new air conditioning units, they could pass along a portion of the costs of such improvements to the tenants at the rate of six percent per year.  Under the new law, these increases would be limited to two percent per year.

Finally, changes are being proposed which would affect all apartments, not just those subject to the EPTA.  These include limiting a security deposit to one month’s rent, and making it easier for tenants to recover such deposits after they vacate.  The new law would also make it more difficult to evict tenants, and giving the tenants more defenses to the eviction process.

As our firm represents both landlords and tenants, we are closely monitoring the status of the new regulations, so that we may continue to represent all parties in the legal process relating to rentals in both Westchester County, New York City, and surrounding areas.  We look forward to advising all of our firm’s clients when the new laws come into play in the future and adjusting our legal advice as appropriate.