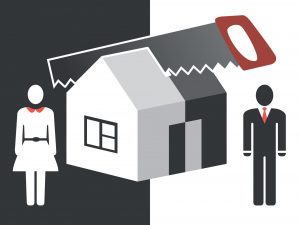 However, in our experience, most, if not all, partition lawsuits can be settled by the parties before there is a Court-ordered sale.  There are generally three ways in which such actions may be resolved.  Let’s say there are two co-owners of a house, named Amy and Bob.  The first way to settle the action is that Amy buys out Bob’s interest, and becomes the sole owner of the property.  The second way is the reverse, in which Bob buys out Amy’s interest and becomes sole owner.  The third possibility is that Amy and Bob agree to sell the property to a third party, and also agree on how the sales proceeds will be divided between Amy and Bob after the sale.

This post will discuss the first two scenarios.  If one party is buying out another’s interest, it is possible that there is a mortgage lien already on the property.  Before finalizing a settlement, a title search should be conducted. This will show all liens and judgments on the property.  Experienced counsel can order such a search and interpret the results for the parties.  Once this is done, the parties need to decide how an existing mortgage will be handled in any settlement.  This will depend on several factors, such as the balance due on the mortgage, which of the parties has been making the payments, and which party is going to remain at the premises after the settlement.

Further, if the parties are co-signors on the mortgage, there is the issue of whether the party whose interest is being “bought out” will remain as co-obligor on the mortgage.  In general, lending institutions will not necessarily remove a co-obligor from a mortgage simply because he sold his interest to the co-owner.  The bank’s position is it approved both parties for the loan, and that both parties should remain liable, even if one of the parties has sold his interest.

In such a situation, the party who is buying out the other and retaining the property may need to refinance the mortgage and complete a title transfer at closing removing the other party from the loan at such time.  The mortgage is refinanced, and some portion of the proceeds would be used to pay the entire mortgage.  That process will eliminate the party being bought out as an obligor on any mortgage.  Once title is transferred, the remaining owner will now own the property “free and clear,” with no mortgage or judgments against the property, except for the new mortgage, made by the only party in title.

Our firm has extensive experience in negotiating settlements to all types of partition actions, including resolving issues with existing mortgages, and welcomes all future inquires.