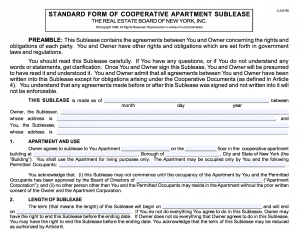 Previous blog posts have discussed potential cooperative rule violations and the procedures to be followed by the co-op when a shareholder violates provisions of the proprietary lease or the house rules.  This post will discuss more specifically the issues which arise when a shareholder attempts to sublet their co-op apartment to another person.

It first should be noted that most co-ops have in their proprietary leases specific rules about who can live in the apartment, if they are not the shareholder listed as an owner on the share certificate.  It is usually limited to direct relatives, such as one’s spouse, children, parents, domestic partner, and the like.  Having these people live in the apartment at the same time as the shareholder is not considered a sublet situation.  However, the proprietary lease usually also has rules limiting usage.  The shareholder must also be living at the apartment, together with the relatives in or guests question.

A more prevalent situation is when the unit owner does not want to reside at the unit, and decides to sublet it to a third party who is not a direct relative.  For the reasons stated above, most New York co-ops have strict rules about subletting.  They generally prefer that units be owner-occupied, and will have restrictions on subletting.  This restrictions can include the length of a sublet (usually requiring a minimum of one year, and a maximum of two years, without the right to renew) and often require all sublets to be approved by the cooperative board.  A written lease and sublet application will be required to be submitted to the Board for approval.

Our firm regularly addresses potential cooperative violations and looks forward to engaging and assisting any parties in this situation.