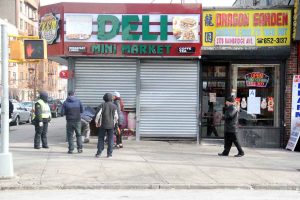 Currently, unlike certain residential properties, commercial properties are not subject to rent regulation such as rent control and rent stabilization.  Many residential apartments in New York City, as well as Westchester County, are subject to rent regulation under the rent control and rent stabilization statutes.  What this means is that tenants living in apartments subject to these regulations, under certain conditions, are entitled to perpetual renewal leases which cannot increase rent more than a certain percentage as set by the New York City Rent Guidelines Board.

However, these regulations do not currently apply to commercial properties.  If a store is being rented to a tenant, only the free market regulates the amount of rent to be paid, and whether the lease will be renewed.  Let’s give an example.  A grocery store signs a commercial lease for 5 years with the rent set at $4,000.00 per month.  At the end of the lease term, if the parties have not signed a new lease, the tenant would be considered a holdover and subject to eviction.  Absent any specific provisions in the current lease relating to a lease renewal, the landlord is under no legal obligation to offer a new lease to the tenant.  The landlord is also free, at the end of the lease term, to request a rent increase to $7,000.00 per month.  If the tenant does not agree to the new rental rate, again, they would have to vacate the premises or be subject to eviction.

The proposed statute would entitle any commercial tenant who has complied with the terms of their current lease to a ten year renewal.  If the parties cannot agree on the terms (including the new rent), then the landlord and tenant would go to binding arbitration to determine the rent and terms of a renewal lease.

This statute would obviously cause a major shift in the legal obligations of commercial lessees and their landlords.  Instead of the free market controlling, tenants would have the legal right to ten year renewals, and also the right to have a neutral third party (the arbitrator) determine their new rent, rather than having the market decide.  Prior blog posts have discussed the issues relating to having arbitrators decide conflicts between parties.

Obviously, there are many issues relating to this proposal which have yet to be determined.  The first is whether forcing the landlords to renew leases at a rate set by a third party is an unconstitutional “taking” of their property, in violation of the United States Constitution.

Aside from the legal issues, another potential problem is that the forced renewals would allow retailers to keep commercial space, even if their stores are failing or not meeting the needs of the communities in which they are located.  Like most proposed governmental regulation, it is questionable whether forcing landlords to renew leases would meet the needs of the community better than the free market does.

Until such a proposal is passed and found to be legal, we would recommend that any commercial lessee have experienced counsel review all proposed leases to make sure that their interests are protected, including the potential right to extend or renew the lease once it expires and standards for future rent escalations.