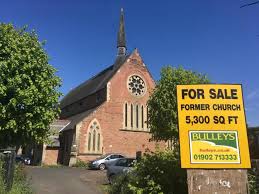 We wish to share a recent news article  with our readers concerning whether selling real estate owned by religious institutions to developers benefits congregants and the neighborhood in general.  Many properties owned by religious institutions have been owned by the organization for decades and, during that time, served the needs of congregants.  However, perhaps over the years the particular population of a religious denomination in an area has dwindled and the institution is currently serving a greatly reduced number of congregants.  In addition, long-held properties may be facing deferred maintenance issues such as a roof that needs replacement and the like.

Of course, real estate developers have always been hungry for a good deal and target congregations that may own such obsolete properties.  Such developers seek to demolish the religious building and change the use entirely, perhaps to build luxury apartments to be sold for a handsome price.  As a result, not only does the religious institution cease to exist, but the character of the neighborhood may change.  Persons served by the soup kitchen in the church will have to find somewhere else to go while a wealthy developer will count his money.

The law in New York does provide some safeguards  for congregants in this situation.   As we  have discussed in prior posts , a New York Religious Corporation seeking to sell, lease or buy property, or obtain a loan backed by a mortgage on property it owns, must obtain approval of the New York State Attorney General’s Office .  The Attorney General reviews a petition presented by the institution in support of the contemplated transaction.  Such petition needs to contain the governing documents of the religious institution, proof of the due calling and required vote of the trustees and congregants as needed by the governing documents and a complete description of the transaction in an affidavit.  In sum, the Attorney General is also looking to confirm that the proposed deal benefits the congregants.  For instance, if the transaction reduces mortgage debt and the new mortgage has more favorable terms, the Attorney General is likely to approve it.  In the alternative, if the building is sought to be sold and a new building may be built in a distant location which prohibits attendance by current congregants, the Attorney General may determine that such a deal will not adequately serve the needs of current congregants and will be rejected.

Our attorneys  regularly handle matters of this nature.  We welcome inquiries from those parties seeking to advance such a transaction.  We are also prepared to address concerns from those who find such deals to be adverse to their congregation’s interest.