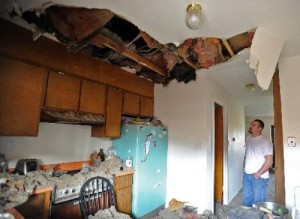 Many legal issues arise in New York relating to rental apartments.  Disputes between landlords and tenants are extremely common, and have been discussed in many posts on this blog.  Extremely prevalent are situations in which the living conditions of the apartment have deteriorated to the point where the apartment may not be suitable for an individual or family to reside at the premises.

However, a question arises when the apartment in question is a cooperative unit.  In such situations, the owner of the shares allocated to the apartment unit is usually the same person residing at the premises.  In essence, they are both landlord and tenant.  What happens legally when such a unit has severe problems which cause them to be unfit for human habitation?  Our firm has been consulted by many clients in such situations.  The first issue to be resolved is the responsible party for the conditions.  Every cooperative has a proprietary lease, which is a document that defines whether the cooperative corporation or the unit owner is responsible to correct certain conditions.  For example, a cooperative apartment may have windows which have deteriorated to the point that they no longer seal and keep cold air out of the apartment.  The proprietary lease needs to be examined to determine whether the cooperative corporation is responsible for replacing such windows.  Other conditions, such as excessive noise, or poor sanitary conditions at the building, may also be the responsibility of the cooperative corporation, rather than the individual owner.

In such situations, the managing agent of the building should be advised, in writing, of the conditions requiring remediation.  If no action is taken after such notice is given, there are several legal options available to the unit owner.  The unit owner can withhold her monthly maintenance payments until the condition is fixed.  We do not usually recommend this course of action, because the inevitable result is that the cooperative will then file a legal action against the unit owner for non-payment of maintenance.  Another option is to file a lawsuit against the cooperative.  Such a lawsuit would seek credit for any maintenance paid during the time in which the unit was uninhabitable, as well as damages resulting from any negligence of the cooperative corporation in failing to repair conditions which may have made the unit uninhabitable.

A final option is to bring an HP Action in the appropriate Landlord-Tenant Court.  Such actions are meant for fast resolution of conditions causing a unit to be unlivable.  Of course, the conditions must be caused by an issue under control of the cooperative corporation, as defined in the proprietary lease.  The advantage of an HP action is that it will be settled more quickly than an ordinary lawsuit.

Our firm has represented many tenants in actions relating to breaches of warranty of habitability, as well as in disputes with cooperatives, and looks forward to all inquiries in these areas.