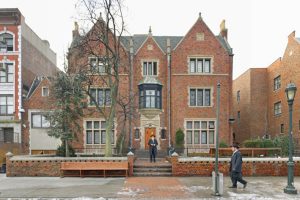 A recent Court decision from the Civil Court of the City of New York (Kings County) involves a dispute regarding possession of real property located in Brooklyn, New York.  More importantly, the building which is the subject of the litigation houses a synagogue which also serves as headquarters for the Lubavitch movement, a  Chasidic (Jewish Orthodox) sect.

The Court decision is quite lengthy (over 100 pages), which is quite unusual for a landlord-tenant matter.  It discusses the history of the dispute, as well as the controlling law.  This blog post will summarize the pertinent issues, and how they may apply to similar situations in New York State.

The Agudas Chasidei Chabad of the United States is a religious corporation which was incorporated in 1940 to establish, maintain, and conduct a place of worship in accordance with the Chasidic ritual and mode of worship of the Jewish Orthodox faith.  In order to do so, they acquired property located at 770 Eastern Parkway in Brooklyn.  The organization later acquired adjacent properties and joined them together to form one building.

As with many religious organizations, after the passing of the founding generation of the organization, disagreements arose among their successors.  The case being discussed involves a dispute between certain members of the congregation, who regularly attended religious worship and studies at the Synagogue, and those individuals who owned and controlled the religious corporation.

A history of the full litigation is beyond the scope of this blog post.  The dispute was heard in several Courts, and has been ongoing for at least a decade.  The recent decision was important in that it discussed basic principals involving ownership, and, therefore, control of property, involving a religious corporation.

The congregation’s members, who attended services regularly, and, in this case, even had their own separate legal organization, were not considered “members of the religious corporation” for legal, ownership purposes.  Although some congregational members may have had a role in managing the synagogue and the educational services associated therewith, control of the property in question remained with the religious corporation and its governing board.

This legal principal of course applies to disputes over control of any religious institution.  Our firm receives regular inquiries regarding such conflicts.  The members of a congregation, who attend worship services regularly, and contribute financially to a religious institution, may have serious questions relating to the management of the religious corporation.  However, from a real estate standpoint, the ownership and control of the land and building in which the worship is held remains with the corporation that is listed on the deed, and individual members or an organized group of members of the Congregation do not otherwise have a legal right to ownership.

Weiss & Weiss welcomes all inquiries from congregants, officers, as well as clergy, relating to their legal rights in this area of the law.